Well, I took a stab at writing true crime and wrote a Novella entitled, “Robert Pickton: The Pig Farmer Killer.” It ended up a best seller and #1 Best Seller in numerous categories! Check it out if you get a chance. This guy can feasibly be released from Canadian prison and has already said he’s going to do the one thing he does best, murder. 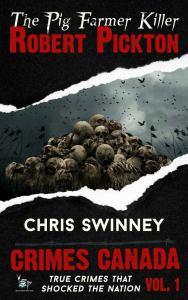 While driving in to work today I heard a radio host talk about how Beyonce “murdered” a song while performing at the Grammy’s. I almost missed the term completely, but I caught myself shaking my head and frankly shocked. The host, who happened to be an African American female, proceeded to explain how well Beyonce performed, and instead of using any number of perfectly acceptable terms to describe a musical performance, the host chose “murdered.” Right after that a vehicle with black paint, black rims, tinted windows, black emblems, and zero chrome passed me and I recalled people calling this style, “Murdered Out.” Again, I was shocked. Then I wondered how we’ve gone so far away from traditional values and family that we feel it’s okay to use a word like “murder” to represent good things or material objects? And I wondered if we’ve gone so far off the deep end that the color or ethnic group (African American) has been associated to such a negative word?  Would it be acceptable for me, a white person, to say Beyonce “murdered” something without causing an outcry?  It just doesn’t feel right, regardless of my ethnicity.

I can’t help but think the media, video games, and the lack of strong families has allowed people to think it’s perfectly okay to use such a powerful term inappropriately. I think most people would agree that media reports mostly violence, video games are all about violence, and families with single parents, or abusive parents, tend to become fractured and provide little moral support for our growing children.  Likewise, these same families expect the schools to raise THEIR children, which obviously is a complete disconnect from true family values.

You guys know what I do. I see dead bodies and investigate homicides. The overwhelming number of my cases are murders. That means someone willingly took another person’s life.  The families and friends of the victim would be crushed to hear someone using the same term used to describe their world falling apart when discussing something positive or material. When I have to talk to the family or friends of the deceased, I try everything I can to make the reality of losing a loved one less painful…it rarely works.  I can’t bring their loved one back. I take their sadness and use it to inspire me to work long hours, miss family events, and do whatever I have to to find the murderer. It helps with closure, but time must pass.

So my point is this, let’s get away from using the term “Murder” inappropriately.  In a perfect world, I wish we could get away from even having to use the word at all. It’s unacceptable, disturbing, and hurtful for the people who’ve experienced such grief and tragedy.  I’d be interested in seeing what some of my African American friends think about this.  If the term is somehow associated to the color black or African Americans, is it okay to associate a vehicle that’s all black to the words “murdered out?” Or use it to describe African American artists-performers-singers-actors? If so, why? Educate me on what you think. It bothers me, and I’m white. But for now, my hope is people will think before they speak and choose better words to articulate themselves.