Hey folks. Been tied up at work and family stuff so I slipped on posting the latest blog.

Sadly, we had to put Bella, the greatest dog we’ve ever had, down. She had terminal lung cancer and it seemed like she was telling us with her face that she was ready. But we weren’t. It was the toughest decision I’ve ever had to make. We miss her dearly. If I ever get any good at making beer, the first one will be named after her.

Alas, it was time to take baby steps forward. The following is my recent home bottling of a super light ale with a slight hop aroma. Enjoy. I’ll post back on how it tasted. Out of the fermenter, it was superb.

CLEAN, CLEAN, CLEAN. If you are home bottling and brewing and you don’t get into the habit of cleaning and sanitizing your process, from start to finish, you are killing the opportunity to create superior beer. DON’T BE LAZY. PBW is the best cleaner I’ve used. Once you clean the bottles, tubing, caps, bottling wand, and everything that is involved in this process, it’s time to bottle. 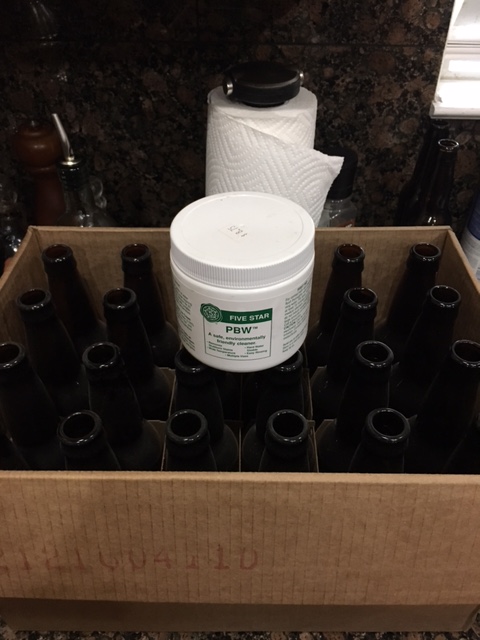 A shot of the pre-bottling CHAOS:

I like to set my bottles aside. If I’ve made some adjustments with carbonation tablets, i’ll keep the bottles separated. For example, the bottles with four tabs on the left and the bottles with three tabs on the right. Hook up your tubing, remove the air lock and lid, and insert the bottling wand into the tubing leading from your bottling/fermentation bucket.

If you aren’t giddy at the sight of the tubing charged with beer, well, I don’t know what to tell you!

Most bottling wands have a built-in mechanism that will release beer once depressed (or pushed down on the bottom of the bottle). Once the bottle begins to fill, it will (obviously) rise. As the beer makes it to the top, you stop. Once you remove the wand, it leaves some room in the neck for the carbonation process. THIS IS A GOOD THING. If you spill some beer while bottling, I STRONGLY SUGGEST YOU DO NOT LICK IT OFF THE FLOOR>>Don’t ask….

You’ll get to the bottom of your bucket and the entrance point of the spigot. There is usually a good amount of beer left lying above the trub. Gently pull the bucket toward you and allow the clean beer to fall into the opening of the spigot. This beer will fill the tubing and wand and you can normally get 2-3 more bottles before the yucky stuff. The picture below shows nearing the bottom, pulling the bucket toward you to get more of the beer, and then the layer of trub, aka “yucky stuff.” DOING ALL OF THIS WITH TWO HANDS IS SILLY, BUT WHAT OPTIONS DO YOU HAVE? I’ve spilled some beer trying to manage all of this, but it’s kind of funny and a challenge, so no worries. 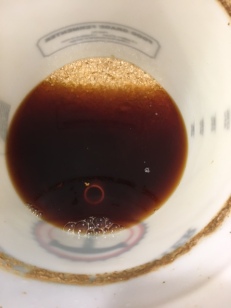 *NOTE* Make sure your caps are clean before capping the bottles.

There’s plenty of different options on the market, but I use a very basic bottle cap press that features a magnet to hold the cap in place. Pressing a cap on a bottle sometimes feels like the bottle or capping device are going to break. They likely won’t. Just use some elbow grease and get the darn caps on. Once that’s over, place them in the cardboard bottle box or on the counter and keep them out at room temperature for at least a week, maybe two. After that process is over, called “bottle conditioning,” throw those bad boys into the refrigerator. In two weeks, start “sampling” bottles. Pour and enjoy.

I hope this was informative and helps with your journey into home brewing. Shoot me an email or comment if you have any questions.

Remember to listen to people who care about you enough to speak to you.

Hey everyone. This is part two of the homebrew on my first stout, an imperial version. I’m not sure why more people aren’t homebrewing, but it’s a shame. The majority of beer on the market tastes the same and they cut corners. Homebrewing allows you to get the flavors, fats, tanins, aroma, bitterness, and other amazing things for your taste buds and nose that overly manufactured beers in plants cannot duplicate. Get back to your roots, no matter what part of the globe you hail from, and begin homebrewing.

First you need to set stuff up, which includes caps (cleaned and sanitized), carbonation tablets (or dissolved sugar), and a cap presser. There’s many ways to do bottle and make beer, I choose the easiest for me.

Once your beer has completely finished the fermentation process, it’s ready for bottling. MAKE SURE YOUR BOTTLES AND ANYTHING YOU WILL USE IS CLEAN AND SANITIZED. You’ll need to get the beer from the fermentation bucket to each bottle. Plastic hosing makes the job fairly simple.

Since I use carbonation tablets, I place them in the bottle prior to putting beer in each bottle. As you transfer beer to the bottles, make sure you pay attention so you don’t over fill the bottles and spill your beer.

Once you get to the bottom of your fermentation bucket, you’ll run into trub. Here’s a photo.

The trub is not good for your finished beer and you should avoid getting any of it into your bottles. In this photo, the liquid is still good and relatively free of sediment so you need to tilt your bucket toward the spigot so you can get a few more bottles filled. Once there’s no more liquid and all you see is sediment, that’s it, your done.

Here’s a few photos of what my homebrew bottling set-up looks like. You’ll notice bottles on both side sides of the bottling bucket (with tubing already attached). You keen observers will see that the bucket reads “Deluxe Fermenter.” That is because I have two buckets with spigots, but for bottling, I use a lid with no hole. The fermenter bucket has a lid with a hole for the airlock. You’ll also noticed little white pellets in the bottles. I experiment often, so on the left the bottles contain four carbonation tablets, on the right the bottles contain five. 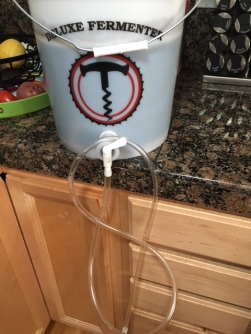 Once the bottles are filled, you have to put a cap on them, crimp the cap, then leave them in room temperature for at least a week. Stouts are normally left out about two weeks because the carbonation process takes a little longer for stouts than other beers. Here’s a few photos of the finished bottling process. 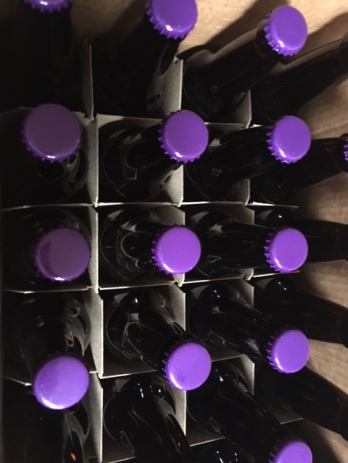 I bottled this case of imperial stout on 9/2/16. I placed it in the refrigerator today, 9/12/16. I know I just got done saying maybe two weeks in room temperature after bottling is ideal for stout, but I COULDN’T WAIT. I drank some of this right out of the fermenter and it was far better than I could have hoped for. I’m eager to drink it and share it with my friends, so I placed it in the refrigerator slightly early. I’ll get over it.

I just started a lager-like ale that I messed with the recipe hoping to get my version of Coors Light. You read that right, Coors Light. I love the blue mountains, and I’m not a homebrew-craftbrew snob. I’ll keep you guys posted.

**AS A SIDE NOTE… REMEMBER THAT LOVE TRULY CAN CONQUER ALL. YOU JUST HAVE TO BELIEVE IN LOVE.